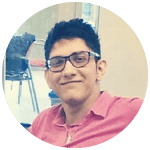 Ali Oryan was a DATCrusher premium member who recently CRUSHED the November 2016 DAT and received one of the highest DAT scores in Canada! Ali was one of the first members to try DATCrusher and used it extensively throughout his DAT preparations. We’ve asked Ali to share his experience to help future students prepare for the Canadian DAT.

1. How did you prepare for the Canadian DAT?

“I did not use a defined study schedule per se, and it was a bit unorthodox at times, for I mainly studied based on my gut feeling, I would study what I thought would be most beneficial for me. For example, I would either spend 1-2 weeks on just biology or on the other extreme, not touch biology for a whole month. The moral of this being, not try to conform to pre-made study schedules; you know yourself best and should use them as guides on what topics you should normally be covering over a given time frame, rather than following them to the cue.

I personally spent about 5 months preparing (including the summer). Out of those 5 months, I probably spent 2-3 months knowing the topics and the remaining 2-3 in September and October to do practice tests. I realized that doing as many practice tests was essential to doing well since I learned more from the practice tests than studying.”

2. How did DATCrusher help you prepare for the Canadian DAT?

“I started off studying for the Canadian DAT using other programs. They were good but I felt they were only catered towards the American DAT.  And since the Canadian DAT is a different exam, I didn’t really know what to expect going into it since there really isn’t any online resources out there for the Canadian DAT (besides DATCrusher).  The main thing that I loved about DATCrusher was how everything was created accurately for the Canadian DAT and it was very representative of what I wrote in November. And whenever I had questions, Shah would get back to me immediately and was super responsive.

As for the tests themselves, they matched the difficulty level of the exam, in fact, it probably over-prepared me for the Canadian DAT.  After going through all the DATCrusher tests, I ended up going through some of the programs that I was using before and I noticed my scores jumped, especially for the PAT. And honestly, I couldn’t have been any happier with the results.”

3. What advice would you give to future students writing the Canadian DAT?

“The most important advice I would give to students is complete as many practice tests as you can. As I mentioned before, I learned more from practice tests than studying in the library since most of the topics covered in the sciences are review from first-year courses.”